Learn how to grow Spanish moss, growing Spanish moss demands care and a few requirements that need to be fulfilled. 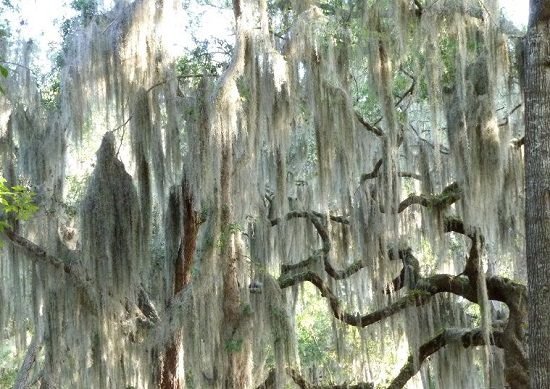 How does Spanish Moss Grow?

Spanish moss (Tillandsia usneoides) is not a moss but a flowering plant that grows over trees, however, it doesn’t leach nutrients from them. It is native in North, Central and South America and belongs to the family of Bromeliads (Bromeliaceae), the family of pineapples. It is epiphytic. Epiphytes (air plants) are those that sit or grow on other plants, but they do not use the energy of host plant or feed on them.

In its natural habitat, it colonized not only on trees but also hangs on power lines, wires or stones. Spanish moss shoots, depending on the form can have different thicknesses are several meters long. Its small flowers are yellowish-green. Like other air plants, it gets water and nutrients from particles in the air.

Most often it is propagated naturally when the tiny pieces of its stems and plantlets spread during rainy or windy weather. In your garden, you can propagate it from division by separating side shoots and plantlets.

To germinate it from seeds, sow them in a substrate with good drainage and put that in a bright location. Remember, humidity promotes germination but once germinated, frequent and regular watering can cause rotting of young plants. Growing Spanish moss from seeds is a slow process. In months it only reaches 1 cm in height.

Maurice’s Robusta: Very popular in Australia this cultivar originates from Mexico. The leaves are thicker and greyish as compared to “Silver ghost.”

Tight and Curly: As the name suggests the leaves of this plant are tightly curled. You’ll find it most commonly in California.

Odin’s Genuina: The overall beauty of this plant is enhanced by its yellowish brown flowers. Guatemala and Mexico are from where it originated.

Overall Spanish moss prefers bright but not direct light and good air circulation. Choose a location that is exposed to light morning and evening sun on a tree or tall shrub.

During summer or if you’re growing it in tropics, must remember that you never place it in proximity to a hot window or wall otherwise the heat will transfer and might be detrimental for Spanish moss.

NOTE: If the moss starts to turn black it’s a sign of too much direct exposure to the sun. Protect the plant before it dies!

Avoid using chlorinated water, use purified, distilled or rainwater. Keep the Spanish moss moist all the time in a hot and dry climate. Otherwise, it will become dormant. Give a good soaking to Spanish moss by pouring water over the leaves when they become dry. In humid and rainy conditions, spray it with water regularly but only when it seems dry. Frequent watering when it is already moist can be detrimental.

Spanish moss care is slightly tricky, but once you understand it, it is simple.

Humidity is an important factor, especially when you’re growing Spanish moss indoors. To avoid it from drying out of the middle or rear drives, spray it from all sides.

Spanish moss doesn’t need fertilizer instead it is itself used as a fertilizer. However, if it is growing poorly or discoloring, spray it with compost tea diluted half with water.

Check out this fertilizer recipe with Spanish moss as an active ingredient!

Simply snip off the ends using a sharp tool to prune it back lengthwise. Avoid over pruning as it results in side-shoot formation.

In summer provide it a light shade and increase watering. Soaking the plant also benefits extensively in hot summers.

It’s not Spanish moss we are worried about it’s you! Spanish moss itself does not hold nutrients for pests and is hardy when it comes to diseases. But many creatures such as rat snakes, jumping spiders, chiggers and bats can reside in Spanish moss. So before you try to tackle it always wear protective gloves and layers.

Aloe Hercules Care | How to Grow Tree Aloe in Pots

How to Grow a Big and Tall Dieffenbachia Like a Tree

How to Make a Christmas Cactus Bloom at Christmas

Wondering if your Christmas Cactus will bloom this holiday season? Check out these simple tips on How...