Can Cats Eat Apples? Are Apples Bad For Cats?

Can Cats Eat Apples? What should be the proper way to give them to cats? Everything is explained in detail in this informative article. 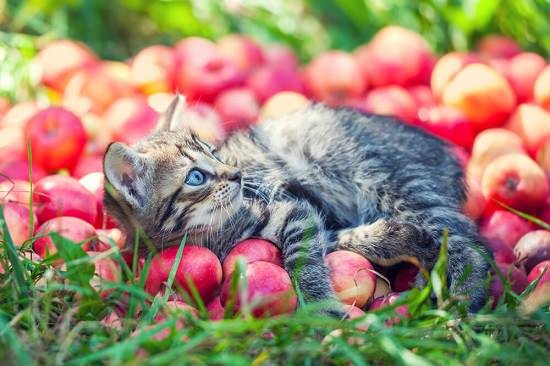 Let’s face it, cats and humans are just plain different. We are different in terms of looks, behavior, and, yes, our nutritional needs. Unlike us, cats are obligate carnivores. Essentially, this means that cats derive the majority of their nutritional sustenance from meat. Unfortunately for our feline friends, being so finely adapted to a meat-based diet does have its downsides. Digesting certain non-meaty foods can prove troublesome and, moreover, can cause some very unpleasant side-effects.

Are Apples Bad for Cats?

This is a little complicated. It turns out that the humble apple is something of a paradox. It pulls off the trick of being at once both toxic and edible. How? Read below!

The stems, leaves, and seeds are considered to be out-of-bounds for cats. Not unreasonably, an apple’s cyanide-containing seeds are regarded as particularly hazardous and as a definite no-no for cats.

Chewing 200 or more apple seeds in one go can kill you but the same does not hold true for our furry companions. Because of their small size, only a few seeds can be fatal. So, where our greater bulk effectively insulates us from the effects of apple seed toxicity, the relative petiteness of cats can leave them all too vulnerable.

How to Recognize If Your Cat Has Been Poisoned 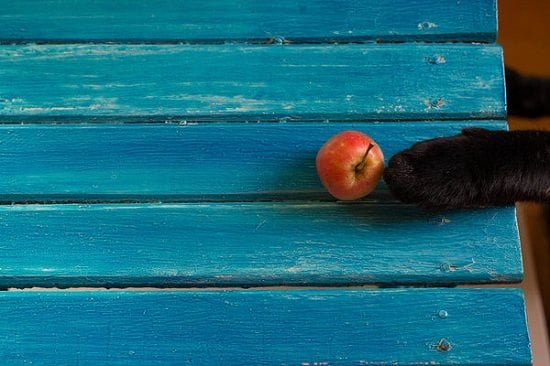 In cases of cyanide poisoning, a cat may develop any one of a number of symptoms. For example, cats may exhibit patterns of rapid breathing, develop diarrhea, suffer seizures, or have vomiting fits. Any of which can be incredibly distressing for anxious pet-owners to witness. However, even under such trying circumstances, it pays to maintain a modicum of cool and to contact a vet as soon as possible.

But, Can Cats Eat Apple?

Apple fruits aren’t toxic to cats, neither dogs. Just remove the apple cores that contain seeds before offering them to your pet friends. Apples could even be described as a beneficial snack for pampered pussy cats. Apples are a rich source of antioxidants, fiber, calcium, and a whole alphabet of vitamins. If this sounds healthy then that’s because it is. And not just from a human perspective either. Also, learn how to give watermelon to cats here.

The Health Benefits of Apple

For cats, calcium promotes the healthy development of teeth and bones, fiber guards against constipation, and vitamin A reinforces their immune system. Meanwhile, an apple’s rich array of B vitamins bolsters nerve cell function and likewise stimulates glucose energy conversion. 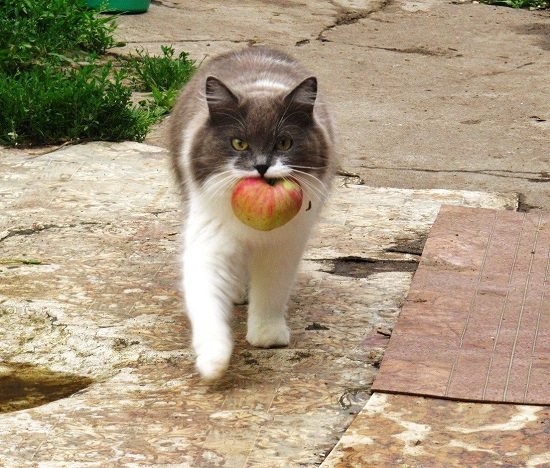 Vitamin K promotes blood coagulation, while vitamin E protects against brown bowel syndrome. And, if all that wasn’t enough, several compounds found in apple skin have been linked with improved lung function and lower cancer rates.

Now, after all that, you’d be forgiven for wondering whether apples–minus the seeds of course–are some sort of feline wonder drug. Well, unfortunately, the reality of the situation is less straightforward.

For all their healthy properties, there’s a number of compelling reasons why apples should never make up more than 10% of any cat’s diet.

When apples are consumed to excess, their nutritional composition abruptly shifts from being a positive to a negative. So abrupt is the about-turn that, far from delivering health-boosts, excess concentrations of vitamins A, B, and K, can rather lead to everything from constipation to involuntary tics to internal hemorrhaging.

What’s more, a diet which is overly rich in apples will also result in protein deficits and hence potentially hinder the development of a cat’s organs and tissues.

All in all, moderation is key. Unless of course allergies are involved.

Although an uncommon occurrence, some cats have the misfortune of being allergic to apples. In light of such, first time off it’s recommended to feed your cat a small portion of apple and observe how they then react. In the unlikely event that chowing down on an apple prompts gastrointestinal issues like vomiting or diarrhea, it could well be a sign that your cat is experiencing an allergic reaction.

Moreover, on top of safeguarding against allergic reactions, conscientious cat owners also need to bear a number of other things in mind. 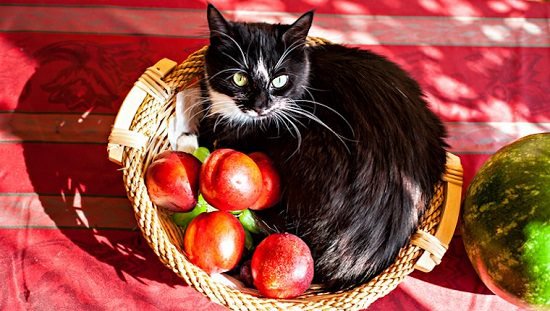 As a rule of thumb, prior to feeding them to cats, all apples should be washed. Why? Well, it’s simple really. Nowadays, the majority of apples are treated with some form of pesticide or fungicide. As luck would have it, cats are sensitive to such chemical substances.

Likewise, the digestive systems of cats don’t take too kindly to rotten apples either. Ingesting rotten apple can prompt bouts of diarrhea, along with a slew of other stomach problems. Needless to say, therefore, rotten apples should most definitely be off the menu.

Moreover, the same goes for any shop-bought applesauce. Commercially produced applesauce contains an array of additives and preservatives, which cats are simply ill-equipped to detoxify. Regrettably, due to the fact that they contain sugar, many homemade alternatives are also considered no-nos.

In the short term, sugar can damage your cat’s teeth or make the whiskers sticky. However, over the longer term, the effects are more pernicious. Much like in the human population, sugar has been linked with increases in obesity and diabetes among cats.

How to Give Apples to Cats

Rather than waste precious time chewing, cats instead have an idiosyncratic habit of inhaling their food. As you can imagine, this hoover-it-all-up approach to eating isn’t necessarily conducive to consuming large chunks of apple. As such, to avoid choking incidents, it’s recommended to either finely dice or puree apple prior to feeding it to your cat.

So, have we got an answer then? Can cats eat apples? Well, assuming that a number of precautions are taken, the answer is YES.

Prior to serving, firstly, make sure that the apple is clean and fresh. Next, just before dicing or pureeing the apple, be sure to remove the core or any of those pesky cyanide-containing seeds.

Can Dogs Eat Cinnamon | Is Cinnamon Safe for Dogs

Lychee vs Rambutan | Difference Between Rambutan and Lychee

Not only do these veggies have distinct pigmentation but they also possess several health benefits. Here are...