These scientifically proven Spider Plant Benefits will make you the fan of this low-maintenance houseplant.

As interesting as its name, these spider plant benefits are wonderful and can make you a fan of this plant. 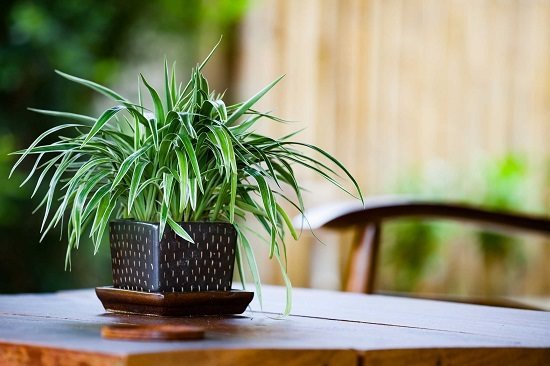 Spider plant and other indoor plants were placed in hospital rooms of the patients recovering from surgery. It was observed that patients staying in plant rooms had positive effects compare to those who were kept in rooms without plants. Lower systolic blood pressure, and lower ratings of pain, anxiety, and fatigue were recorded. Check out the abstract of the study here! 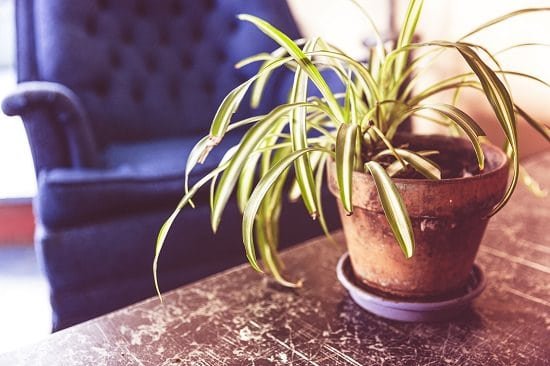 If you’re a serious serial indoor plant killer, spider plant can end your streak. It thrives on neglect and can adapt to various climatic conditions easily. It’s a very forgiving houseplant and doesn’t mind the occasional mistakes of overwatering and underwatering. It grows in both low light and part sunlight, although we suggest to place it at a spot with bright indirect sunlight. 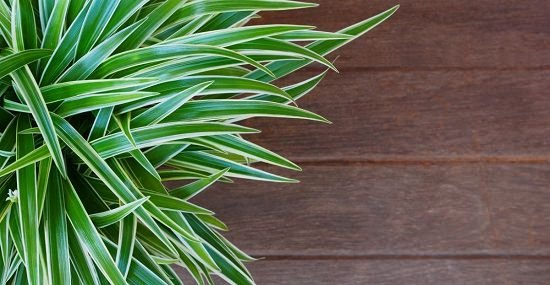 Plants improve the breathing habitat for humans, and spider plants are no exception to that. It’s easy to understand from the simple fact that plants produce oxygen and we consume it. So having a houseplant like a spider plant at your workplace or home will naturally increase the indoor oxygen levels. Another interesting point is that variegated varieties of spider plant produce more chlorophyll than other variegated houseplants which means more oxygen production. 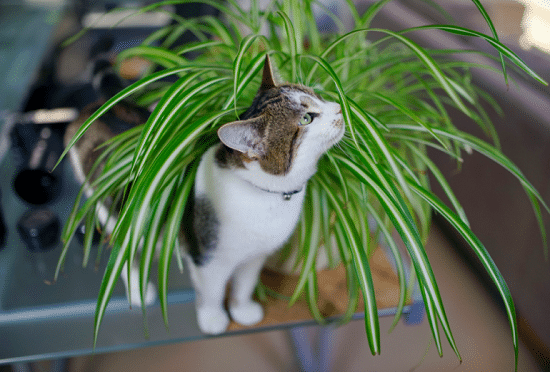 Also Read: Plants that are Safe for Dogs 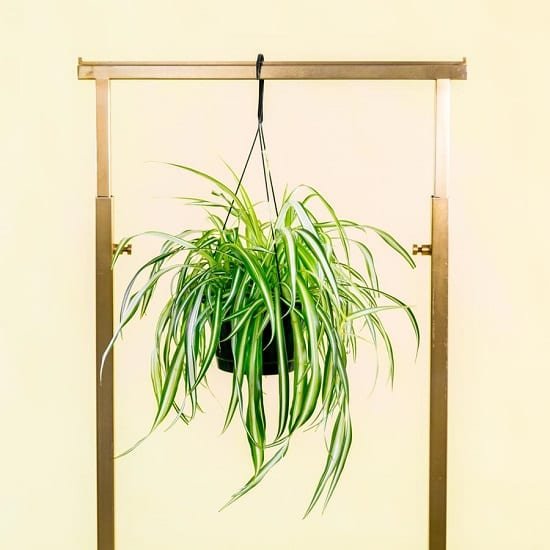 Spider plant was a part of NASA Clean Air Study. It is most effective in removing carbon monoxide, formaldehyde, Xylene, and toluene. It is better than many indoor plants that participated in that experiment. This National Wildlife Federation article claims that spider plant removes more than 95 percent of toxic agents from the air, one of the spider plant health benefits to consider.

Carbon monoxide is odorless, colorless, and tasteless gas that does not cause any irritation. Incomplete combustion of carbonaceous fuels such as wood, petrol, coal, natural gas, and kerosene produce Carbon monoxide. In urban areas, the primary source of this pollutant is exhaust from motor vehicles. Gas stoves, gas refrigerator, tobacco smoke, wood burning stoves, fireplaces, and other fossil fuel burners raise carbon monoxide level indoors. Some other exposure sources and health risks are listed on CDC‘s website.

Vital organs in our body such as the brain, nervous tissues, and the heart need oxygen to work properly. As the level of carbon monoxide level rises, oxygen in the hemoglobin reduces simultaneously. It increases the chance of CO poisoning in people suffering from chronic heart disease, anemia, or respiratory problems. Lack of coordination, fatigue and concentration problem are also associated with raised CO levels as stated by the Department of Environment and energy.

WHO guidelines for indoor air quality, includes formaldehyde in its list of toxic pollutants. This colorless, flammable, strong-smelling chemical is commercially used for making building products. Exposure in indoor space is mainly due to Urea-formaldehyde resin is used for making adhesives of particle board wood. Brand-new flooring, furniture, particleboard, paneling, cabinet, carpets, and mattresses raise the risk of formaldehyde exposures. Some other sources of formaldehyde emission are smoking, paints, cooking, cosmetics, fuel combustion from traffic, etc.

The significant health risk of formaldehyde is that it poses a carcinogenic risk and cause nose and throat cancer, claim by American Cancer Society and NIH. It can also irritate eyes, nose, throat and some other severe breathing problems and allergies.

When exposed to formaldehyde for 24 hours, spider plant reduced the formaldehyde levels by approximately 88 percent. This research–Detoxification of Formaldehyde by the Spider Plant, confirms it. Another similar scholarly article to support this claim is here!

It is used widely as a solvent in many industries and also in medical technology. Majorly used in printing, rubber and leather industries, it is also available in a small amount in airplane fuel, gasoline, and cigarette smoke. Buildings with poor ventilation are responsible for the raised level of xylene in indoor space. Check out this detailed article on ASTDR, which covers all aspects of xylene exposure.

Irritation of the skin, eyes, nose, and throat, obstruction in breathing, diminished function of the lungs, slow response to a visual stimulus, impaired memory, stomach discomfort are some of the ill effects xylene exposure. NCBI also recognizes xylene as a health hazard for humans.

Spider plant helps in the reduction of xylene from the surrounding environment. You can also have a snake plant as it is also proficient in removing xylene. Check out these Health Benefits of Snake Plant.

You are more susceptible to get exposed to this volatile chemical in the indoor space rather than outdoor space. As a solvent, toluene is found in paints and other finishes, adhesives, automotive products, and also in some personal care products. Tobacco smoke is another way to get exposed to it. It is also added to gasoline, which means it can enter your house from the smoke produced by vehicles and even from the attached garage if you store fuel there. As per this report, if your home is located nearby an industrial-contaminated site, it can result in higher level of toluene.

The nervous system is most severely impacted by toluene exposure. Some of the neurological effects in case of short-term exposure include loss of attention and concentration, vision and hearing dilemmas, recalling problem, etc. Necrosis is a severe disease caused by long-term exposure to toluene. Also, check out these guidelines for levels of acute toluene exposure. Another study to confirm the fact that Toluene is toxic to humans is on this article by NCBI.

You can easily lower these risks by planting a spider plant. Areca palm, Boston fern, and peace lily are some other houseplants which lower the indoor toluene levels. 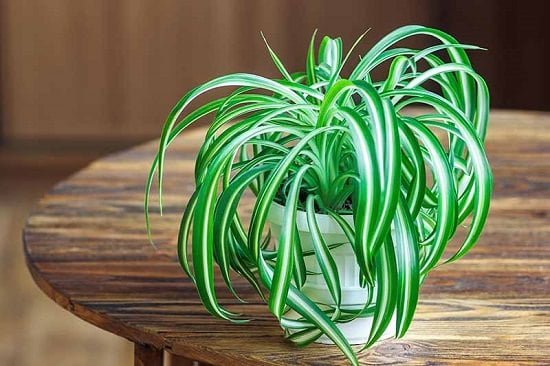 Spider plant removes one of the most harmful pollutants to humankind, Particulate Matter. These fine particles can go into your lungs and bloodstream and cause harms. Check out this study.

It has already been a well-known fact that spider plant can absorb nitrogen dioxide effectively. This toxic gas has many harmful effects on the human body, learn them here.

Spider plant also absorbs ozone, which is becoming a general indoor air pollutant nowadays. Read this educative article to understand how it can be harmful to you. Three common houseplants–Spider plant, snake plant, and golden pothos were evaluated to find out their effectiveness in reducing ozone. The result showed that ozone depletion rate was higher in chambers that contained these plants. Read the full study here. 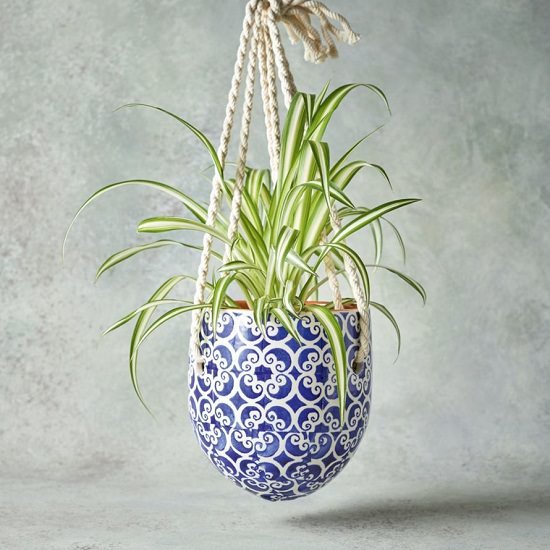 One of the spider plant benefits is, it looks very appealing as a houseplant. The best part is that you can plant it in a hanging basket or any usual pot. The spiderettes that outgrow from the mother plant and appear as if the spiders are dangling down from the pot enhances the beauty of this plant. Learn how to grow spider plant indoors here.

Do you have a small balcony? Do you need the inspiration to renovate it? See these 11...