Spiciness lovers, how hot can you go? Do you know about the Different Types of Pepper? Here are the Best Varieties of Pepper for you!

Here are the best Varieties of Pepper that you can cultivate easily in pots! We are sure you must have never heard about these Types of Pepper!

Here’s all you need to know about growing peppers

The nutrition of each kind of pepper varies, but if we have to note down the nutrition in peppers in general, they are a rich source of Vitamin C. There are several varieties that are rich in Vitamin A. The key element in pepper is Capsaicin which makes any chili spicy and has been a great help in making medicines for ages.

However, peppers also belong to the nightshade family and are linked with inflammation. So, anybody suffering from autoimmune conditions should avoid Different Types of Pepper.

Here are some fantastic tips to make pepper hotter

How to Use Different Types of Peppers in Cooking 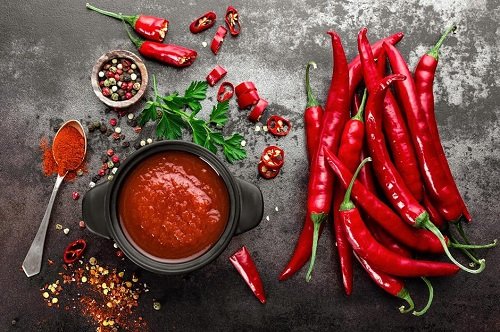 Different Types of Peppers are used in cooking almost everything from condiments and sauces to powders and spices. You can use these ingredients in jellies, soups, salsa, stir-fries, dips, stews, and more.

With a bit more tanginess than bell peppers, this sweet pepper is mostly used in sandwiches, salads, and pizzas. You will usually spot them at Italian joints.

You will often notice this canned pepper in special grocery stores. They are often either pureed for sauces or baked and stuffed with cheese. 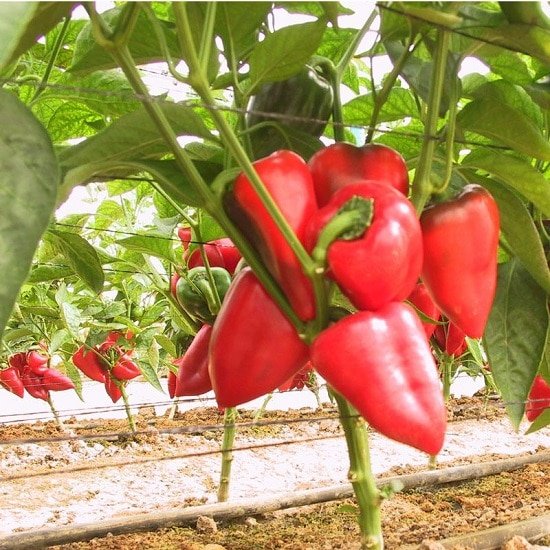 They are considered a key ingredient in pimento cheese and are also called cherry peppers. These peppers are not so spicy and are an excellent choice for stuffing. 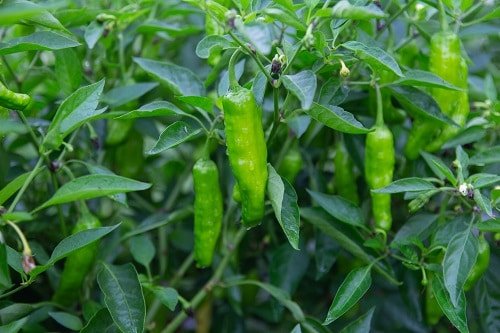 Shishito peppers are often drizzled with sauce or oil and make for a good appetizer. Usually, it is a tame kind of pepper, but there is always a spicy one in the lot! 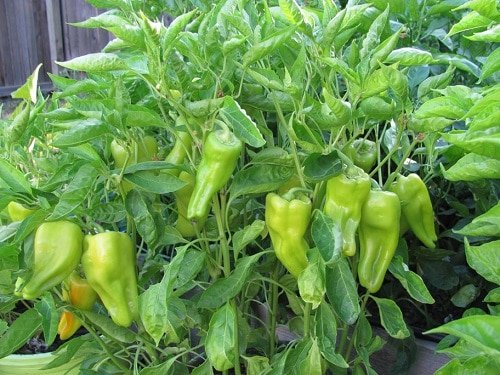 Also popular as Cubanelle and Cuban pepper, they are slightly mild in spiciness. Use it to flavor your favorite dishes as a bell pepper alternative. It is one of the best Types of Pepper you can grow.

Learn about the growing chili pepper in pots here

The pepper looks like a bell pepper but tastes nothing like it. This one is a hot pepper and can make you reach for a glass of water pretty quickly!

Ancho chilis are a dried form of Poblano pepper. They have a mild to medium heat level and are hotter than pimentos and banana peppers. 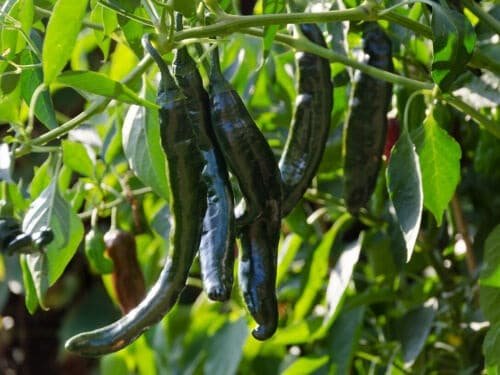 This one is popular in the sauce because of its mild heat. It often comes after the Jalapeno on the hotness test. It is one of the best Types of Pepper you can grow. 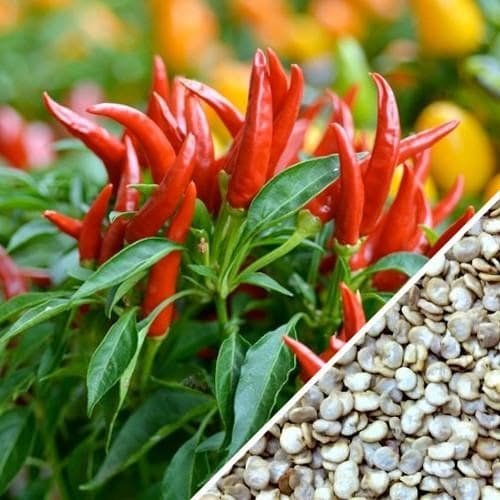 This spicy pepper falls between habanero and cayenne peppers in terms of heat. It is widely used in Thai cuisine. It is one of the best Types of Pepper you can grow.

Canned green chiles are mostly Anaheim peppers. They are less hot than habaneros and more like poblanos.

These are on the hotter side of peppers and edible, mostly in Portuguese and African cuisines, as they are too hot. 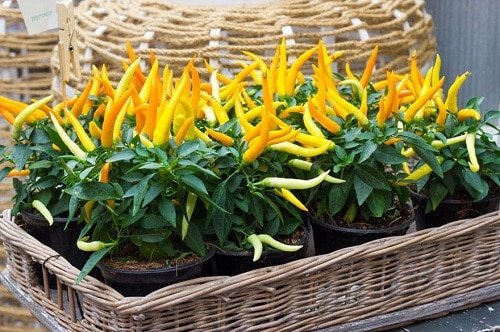 This sweet kind of pepper ranges from too hot to very mild in terms of heat. These thick flesh peppers can be stuffed, cooked, used in pickles, and chopped up raw for salads.

These pepper will not burn your tongue like some of the varieties of peppers. Guajillo may look hot, but it is more on the little sweeter side. 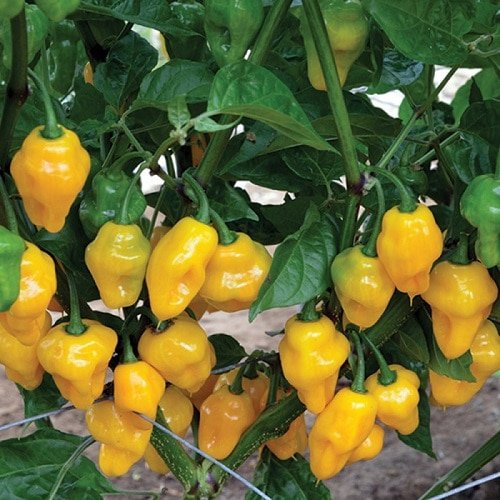 These are one of the hottest available peppers in the world and hotter than jalapenos. However, underneath all the hotness, it has layers and hints of sweetness, too! 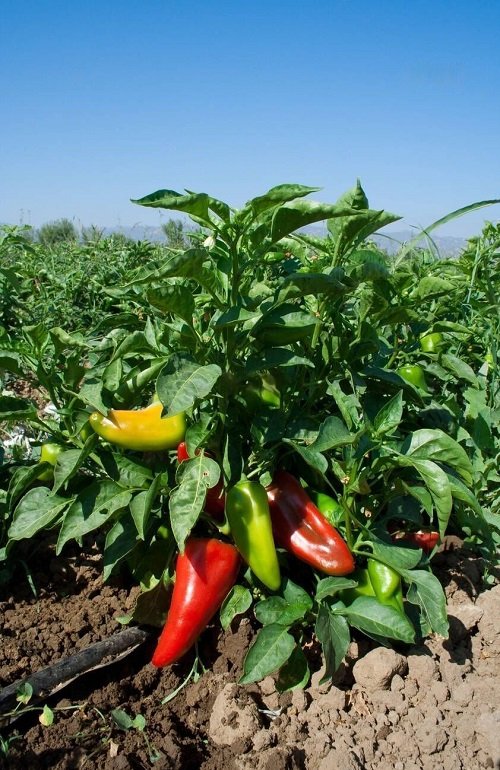 These are a bit sweeter and spicier and similar to jalapeno peppers. They are a top choice in Latin dishes such as soups, dips, stews, or fire roasts. It is one of the best Types of Pepper you can grow.

The pepperoncini look similar to banana peppers and, surprisingly, taste similar.  However, these are a bit tangier and less spicy. It is one of the best Types of Pepper you can grow.

Scotch bonnets are always compared to habaneros in taste and are widely used in Caribbean cuisine. This is not the mild one, so please consume this one with great caution! 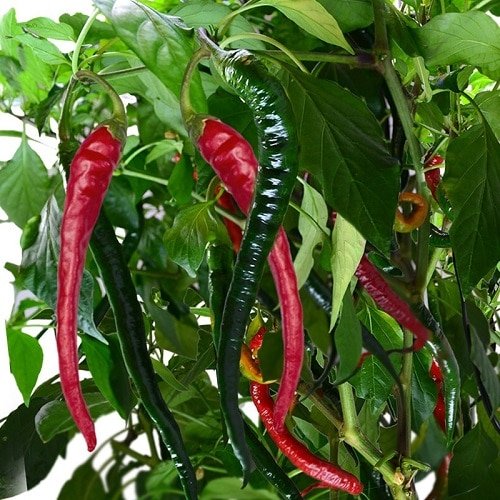 Cayenne peppers are known to put your mouth on fire and are hotter than serranos. Besides red cayenne peppers, there are also cayenne gold peppers that are yellow in color.

Put these 12 things in your pepper planting hole to get the best flavors!

Hotter than jalapenos but milder than habaneros, serrano peppers are sometimes minced. They are also used in guacamole and salsas.

Komodo dragons are as hot as ghost peppers and can be well compared to them. These peppers taste sweet until the spiciness sets in. 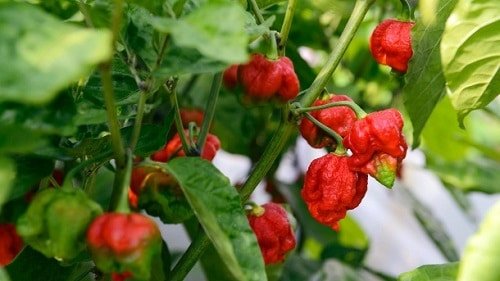 This is one of the smallest peppers and one of the hottest. This pepper is not recommended for eating purposes and is not even available commercially. 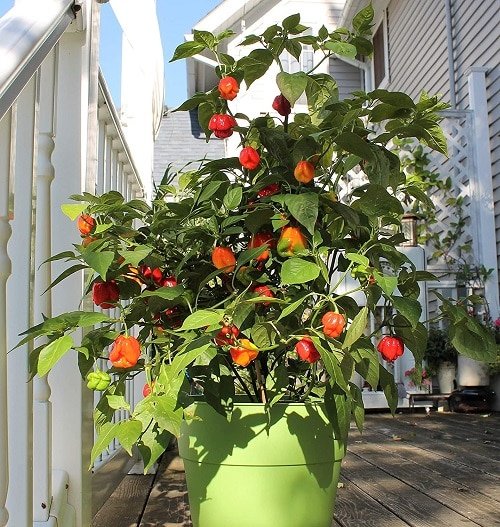 It is the king of the hottest types of pepper, even hotter than the Komodo Dragon pepper! Carolina Reaper is not available easily. It is one of the best Types of Pepper you can grow.

These are not as dangerous as Carolina Reaper, but they are usually compared to the Komodo dragon pepper. It is one of the best Types of Pepper you can grow. 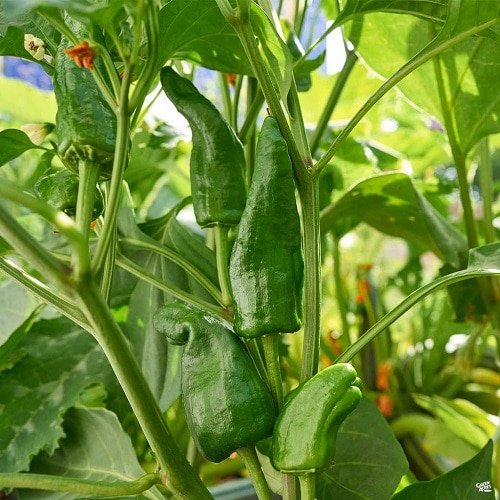 These are usually mild and sweet in taste, but occasionally, this pepper could taste a lot hotter. It usually grows in Padrón in Northwestern Spain. 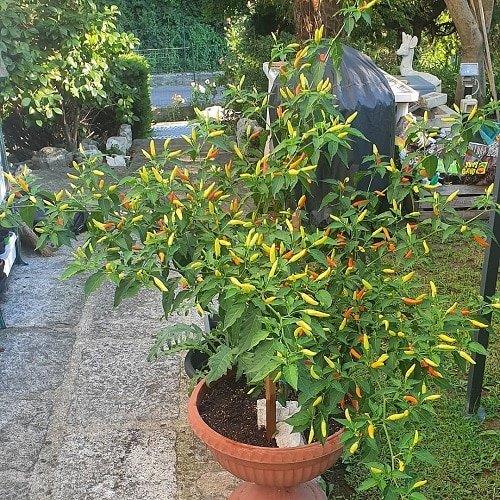 Upon reaching its mature age, the pepper measures 1-2 inches in length and is bright red in color. It is smashed and mixed with vinegar and salt to make the famous Tabasco sauce. 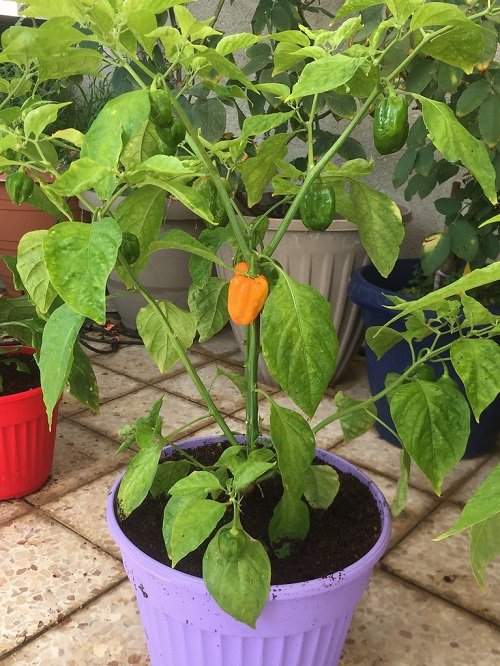 This Mexican pepper is also known as Chipotle and is usually plucked from the vines while they are still green. These peppers taste slightly fruity and are typically used in sauces, pizza, pasta, and salsa.

Basque Fryer is also called doux de Landes, piment basque, and Doux long des Landes. This Variety of Pepper is found on the border of Spain and France. This pepper is sweet and can be eaten raw, sauteed, and roasted.

Thai pepper can be found in many different types, and all Thai peppers are red. For such small pepper, they are incredibly hot and usually used in stews and soups.

Hungarian Wax Peppers are also known as Hot Yellow Peppers. Their floral aroma and heat are an important part of Hungarian cuisine. It is one of the best Types of Pepper you can grow.

Mini sweet Pepper is tiny pepper that tastes and looks similar to Bell Peppers. However, they are slightly sweeter and have lesser seeds.

Black pepper starts as green berries on vines, and once they are ripe, they turn into a dark red shade. They shrivel in the sun and form black peppers. It is one of the best Types of Pepper you can grow.

Wondering where does black pepper come from? Click here

Melrose Peppers can grow in many climates and fruit all year round. Usually, it is used in Mexican cuisine and can also be eaten raw.

Chimayo Peppers can be used to make powder and added to salsa and sauces. This pepper is grown in the Chimayo valley and thus the name.

Purple Beauty Peppers are a kind of sweet and usually cultivated in greenhouses. They have a stunning deep purple shade that can vary according to the intensity of the chilies.

Alma Paprika Pepper is an heirloom pepper from Hungary used in Hungarian cuisine. This deep red pepper has a smoky and sweet taste and is named after Alma town. It is one of the best Types of Pepper you can grow. 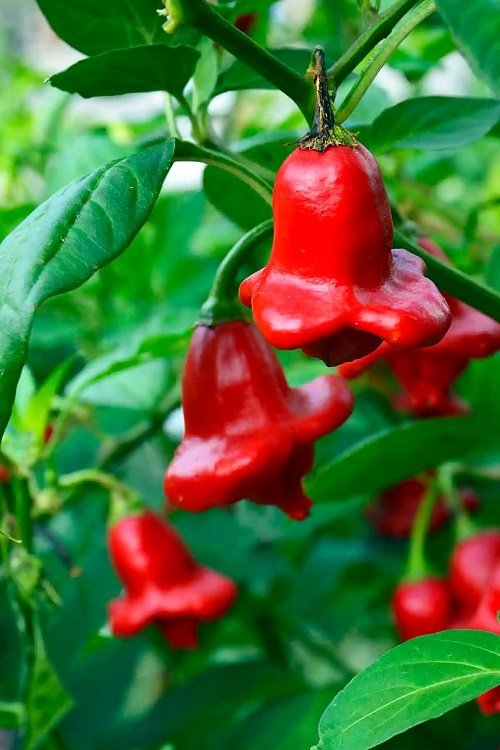 Bishops Crown Peppers are round bell like chili peppers that are orange or red. With thin skin, these peppers have a spicy and sweet flavor.

Hatch Peppers are grown in New Mexico’s Hatch Valley. The chili has a smoky, distinct flavor in many dishes like burritos, enchiladas, and chile Rellenos.

Puya Pepper is a thin, long pepper, usually red or green, native to Peru. This is a hot pepper with a spicy taste and is used in Peruvian cuisine to make them hot. It is one of the best Types of Pepper you can grow.

Aleppo Pepper is a chili pepper that got its name from the city of Aleppo in Syria. This medium-sized fruit has a fruity, spicy flavor and is red. 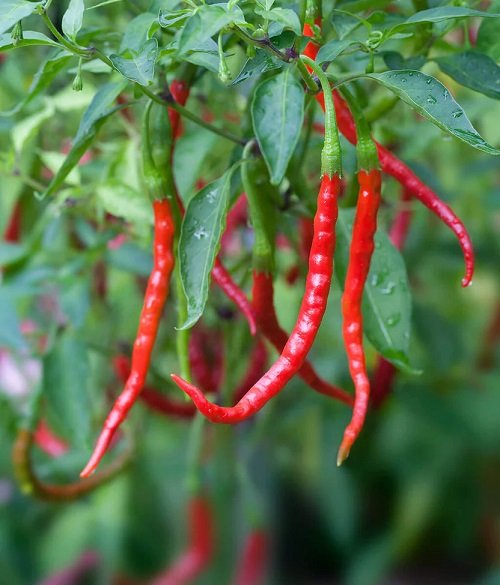 It is a kind of pepper that is thin, red, and long from Mexico. It is known for its hot flavor and is often used in Tex-Mex and Mexican dishes. It is one of the best Types of Pepper you can grow.

This pepper got its name from Edward of Woodstock, the Black Prince. It is a variety of Capsicum annum and is very hot in flavor, which scores 30,000 Scoville heat units.

Black Cobra Pepper is a very imposing pepper called the Goat’s Weed Pepper. It grows upright in red, black, and green shades and is also used for ornamental purposes.

Tien Tsin Pepper is named after China’s province called Tien Tsin. This Chinese pepper has a distinct taste that is slightly fruity and spicy and famous for its use in dishes like Kung Pao chicken. It is one of the best Types of Pepper you can grow.

Aji Amarillo Pepper is a type of pepper used mostly in Peruvian dishes. With a fruity taste and bright orange shade, this chili is a popular ingredient in many traditional dishes of Peru, like aji de gallina and ceviche.

How To Grow Krachai | Growing Fingerroot

How to Grow Garlic Indoors | Growing Garlic In Pots

How to Grow Star Anise | Care and Growing Star Anise

21 Genius Ways to Use Space Above Your Kitchen Cabinets

Discover some of the most Genius Ways to Use Space Above Your Kitchen Cabinets! Follow these ideas...